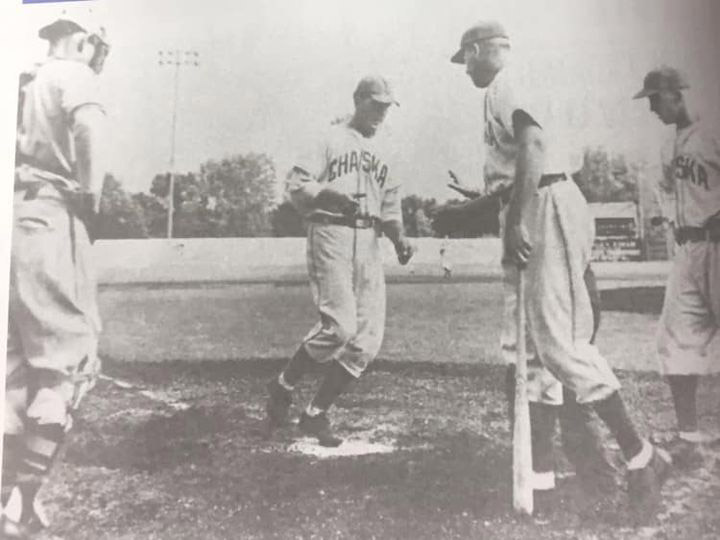 The Boys of Summer…1947. Bill Schalow being congratulated by Scrubby Engelhardt and Sparro Dressen after hitting a home run. The Cubs went on to win the state championship that year. Image courtesy of the Chaska Historical Society

Batter up for three summer weekends to come to watch some of the best in amateur baseball battle it out in our own historic Athletic Field in downtown Chaska. It’s a perfect time to watch some ball, whether you’re a die-hard slugger or want to come to cheer on some town ball favorites!

The 98th Annual Minnesota State Amateur Baseball Tournament will take place August 20-22, August 27-29, September 3-6, and games will occur in Chaska at Athletic Field (home of the Chaska Cubs), as well as in Waconia and Hamburg.

Chaska Athletic Park has been the site of many great events, including four State Tournaments (1955, 1988, 1998, 2008). It was formed in 1950 when two local groups (Greater Chaska, Inc. and Chaska Athletic Association) joined forces to propose and pass the ballpark’s construction, paid for by the community. Athletic Park was dedicated on August 11, 1950, and Chaska High School football played there until the early 1970s.

Until recent improvements, Athletic Park could typically be underwater depending on Spring flood conditions. We are now happy to have a new and improved stadium that will last for generations to come.

You can check out wch2021.com for information and history on the teams and venues, schedules, photos, and apparel. Hope to see you there!

FacebookTwitterRedditLinkedInWhatsAppTumblrPinterestEmail
Page load link
We use cookies on our website to give you the most relevant experience by remembering your preferences and repeat visits. By clicking “Accept All”, you consent to the use of ALL the cookies. However, you may visit "Cookie Settings" to provide a controlled consent.
Cookie SettingsAccept All
Manage consent

This website uses cookies to improve your experience while you navigate through the website. Out of these, the cookies that are categorized as necessary are stored on your browser as they are essential for the working of basic functionalities of the website. We also use third-party cookies that help us analyze and understand how you use this website. These cookies will be stored in your browser only with your consent. You also have the option to opt-out of these cookies. But opting out of some of these cookies may affect your browsing experience.
Necessary Always Enabled
Necessary cookies are absolutely essential for the website to function properly. These cookies ensure basic functionalities and security features of the website, anonymously.
Functional
Functional cookies help to perform certain functionalities like sharing the content of the website on social media platforms, collect feedbacks, and other third-party features.
Performance
Performance cookies are used to understand and analyze the key performance indexes of the website which helps in delivering a better user experience for the visitors.
Analytics
Analytical cookies are used to understand how visitors interact with the website. These cookies help provide information on metrics the number of visitors, bounce rate, traffic source, etc.
Advertisement
Advertisement cookies are used to provide visitors with relevant ads and marketing campaigns. These cookies track visitors across websites and collect information to provide customized ads.
Others
Other uncategorized cookies are those that are being analyzed and have not been classified into a category as yet.
SAVE & ACCEPT
Go to Top